To the suggestions that IKTP does not love or even does not recognise the present Pope I respond: IKTP loves the Vicar of Jesus Christ on Earth, our Holy Father Francis. It is this kind of love which should every Catholic feel towards each Successor of Saint Peter and which may be manifested, as it is in my case, in an everyday prayer for the Pope. There is no point in concealing, however, that we do not love Francis as much as his predecessor, our beloved papa emeritus Benedict XVI; we have the right to do so.

History, as well as human common sense,  proves that a conclave may appoint for the bishop of Rome such a person which will be a good, bad or simply average pope and there are no reasons why XX or XXI century should be the exception. One will be able to fully assess the Francis’s pontificate only when the Lord recalls him, as the second resignation seems improbable to me. Yet, even now, one may highlight certain aspects which do not allow pomponers to cherish the Pope.

The first signs in heaven and Earth on the day of the election of card. Bergoglio showed that two things may be expected: the white fumata after only five ballots and the smiling face of card. Bertone did not bode well for any significant reform of the Curia, whereas the lack of the choir dress of the Pope, coupled with the sad face of mons. Marini, were the foreshadowings of, at least partial, departure from the style of “poping” of Benedict XVI, in the broad sense of the term. Francis has not decided yet to struggle with the bureaucratic machine of the Vatican. However, he practically at once embarked on destroying the gains of multiannual and patient efforts of his predecessor.

Analysing the attitude of the Holy Father, one should pay attention to two factors which massively influence the assessment of his behaviour: the pace of the changes and their context. One would perceive the Pope’s actions in a different way, if card. Bergoglio had been elected after the death of John Paul II: his aversion towards various elements of the papal ceremonial would be even a logical continuation of the actions of his predecessor, which, in more distant future, might result in the Pope maybe even in a white sweater with a cross pinned on his chest. If anyone rejects the traditional symbolism, then, e.g. wearing cassocks by priests, additionally in various colours, seems to be absolutely useless. This kind of reasoning is followed by a host of clergymen. Yet, Francis stood on the Benediction Loggia after Benedict: as “papa Ratzi” had changed the course and Francis did not continue this line of changes, he gave a clear signal which was well understood not only by lurking media, but also by many Catholics, especially priests: Benedict was an old grandpa who liked to wear fancy clothes but it is over and now we are returning to, so called, noble simplicity. Thus, Francis lacked tact of the previous popes who, at least in the beginning of their pontificates, had retained the style of their predecessors.

In the very first hours of his pontificate Francis “hit” Benedict and it is the fact, regardless of whether the carnival stories of the Sistine sacristy are the fact or simply an embellished gossip. One may, of course, pretend that the questions of papal garments or a certain splendour are secondary issues but since the times of Paul VI, to the which moment they were simply the standard, they have become the medium of a certain vision of the Church. This dreary seesaw effect definitely is not conducive to the reforms which are essential for the Church of our times. 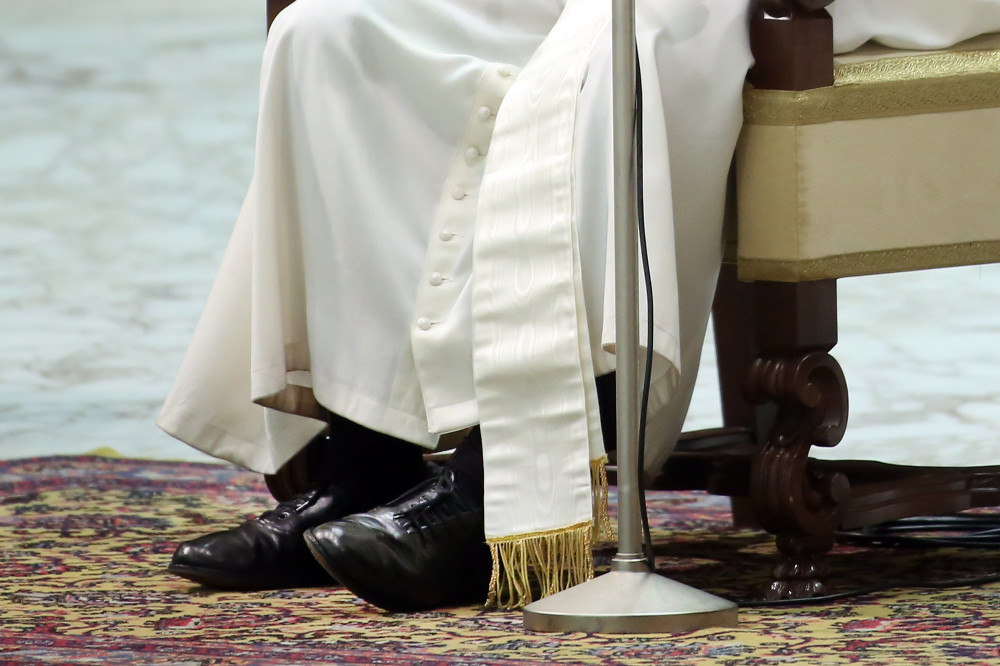 The aforementioned changes are usually justified by the humility and simplicity of the Holy Father. However, it seems to be more proper to call them the habits or the idea of cardinal Bergoglio, for one would easily accept the statement of cardinal Wyszyński in which he beautifully explains the meaning of true humility in fulfilling the function in the Church hierarchy. An excellent example for Francis could be one of the popes of XX cen. who, despite wearing tiaras, fanons and silken cassocks, went down in history as a person of exceptional humility and simplicity; fulfilling service in the world of pomponious Papal Court did not disturb him cultivating these virtues and the enormous love of the faithful convinced his successor to elevate him to the glory of the altars. Saint Pius X – pray for our Pope Francis!

The problem with Pope Francis and his, somehow justified, desire to accentuate the monastic poverty has its source in the reforms of Paul VI, because of which today the garments of a pope from the secular clergy does not differ from the robes of the Successor of Saint Peter who was a member of an order.  But for these disastrous changes, Francis, preserving the tradition and acting according to the logic and the pompon, would not wear the choir cassock made of moire, but he would don an ordinary, woollen one instead, and all would be happy. And whom did it bother?

In short, one may say that the Pope has aversion to two colours: red and gold. Because of that reason papal shoes, mozzettas, and even tabarro frequently used by John Paul II, returned to the papal wardrobe. It led to the situation where during the Way of the Cross on Good Friday Francis wore a white greca, despite the fact that the red colour of the papal mozzetta or tabarro would be so natural and symbolic that day. The similar fate met the papal throne during solemn audiences or the fanon and most of the vestments used by Benedict XVI and his assistant ministers. Even the papal belt did not survive unchanged – it has been deprived of the papal coat of arms, which can be explained only by the desire to abolish something else which had been not abolished by predecessors.

Francis has performed other bizarre actions which are or incomprehensible e.g. celebrating the Mass on Maundy Thursday in a penal institute and washing the feet of infidels and women, which is a nonsense from the liturgical point of view, or incomprehensible and inconvenient, e.g. dwelling in the St. Martha’s House. I truly sympathise not only with the sentries and guards, who had to completely reshape the schemes of the protection of the Pope, but also with the housemates. What was the reason to abandon the papal apartments? Not their splendour, because one would not speak about them in this category. It seems to me that the true reason is the aversion of the Pope to “lonely” celebrations in the papal chapel, during which he would not be oriented towards people. It may be confirmed by everyday Masses of the Pope which, nota bene, represent very low liturgical level, and by the fact that even on the very first day of his pontificate Francis ordered to set a new altar in the Sistine Chapel, which was the biggest blow targeted at the liturgical vision of Benedict XVI.

Finally, a question remains:  would Francis go further in destroying the achievements of his predecessor, if the author of, so called, the reform of the reform was not alive?