The papal liturgy had several variants. As a rule it was divided into a Low Mass and into a Pontifical Mass, similarly to the bishop’s Mass. An everyday Mass was usually celebrated in a private chapel in the Apostolic Palace or in the residence in Castel Gandolfo. The Pope was dressed and celebrated the Mass in the same manner as every bishop did; he used the missal and the altar cards, so this liturgy did not differ much from an everyday mass of any priest. Until now, only in the case of Pius XII we have encountered photos on which one may observe that it was only the butler in a tail-coat and none of the papal familiares who served the Pope during the Mass.

When Pope did not celebrate a Solemn Pontifical Mass, but when a Mass in public took place, the Eucharist was celebrated usually on an portable altar, which was placed in one of the chambers in the Apostolic Palace. Sometimes it occurred that such a Mass was celebrated on one of the papal altars that were normally reserved for solemn masses. The Pontiff was dressed up like a priest. Still, he was assisted by two bishops (those, who stand in the picture) and by four master of ceremonies. The role of a torch-bearers was fulfilled by the papal chaplains. During such a mass, the Pope used alternately a Missal and the Pontifical Canon.

Taking into consideration the length of solemn Masses, the Pope ordained the bishops during the recited masses, for which he was dressed in pontifical vestments, apart from falda. As it can be seen in the picture, during the papal recited masses, just like during the bishop’s ones, it was bugia that was used, not a candle. Next to the Gospel side by his Missal stands a consecrated bishop (a curved top of a crosier is visible); next to him stand co-consecrators (although their presence was not necessary) dressed in the copes. By the side of Epistle, a ferule can be noticed. Still, the most beautiful element is the tail of the Pope’s choir cassock ♥

Another kind of the masses celebrated at the Pope’s chapels was a Missa coram Summo Pontifice, that is the mass in the presence of the Holy Father. He assisted in it from the throne (in the same manner as the other bishops did) dressed in mantum and accompanied by the cardinals in solemn choir dress.

The Requiem Mass could be celebrated coram S. P. as well. The Pope was dressed in a red mantum and violet stole then. After the mass, it was the Pope who gave absolution upon the catafalque. If the Requiem preceded the Office for the Dead, the Pope participated in it dressed in the cappa magna.

The most solemn of the papal liturgy was a Solemn Pontifical Mass in which numerous members of the Papal Court took part, as well as the cardinals parati – dressed in liturgical vestments that were put on their cassocks and rochets, that reflected their degrees within the College: cardinal deacons in the dalmatics, cardinal priests in chasubles and cardinal bishops in copes, all in white mitres of damask silk. 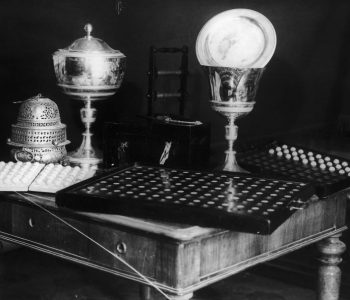 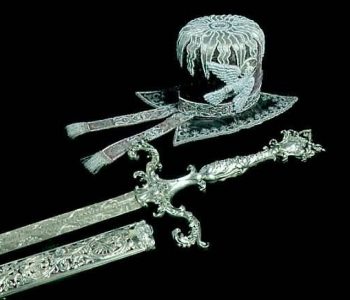 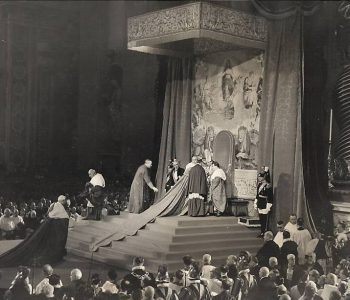